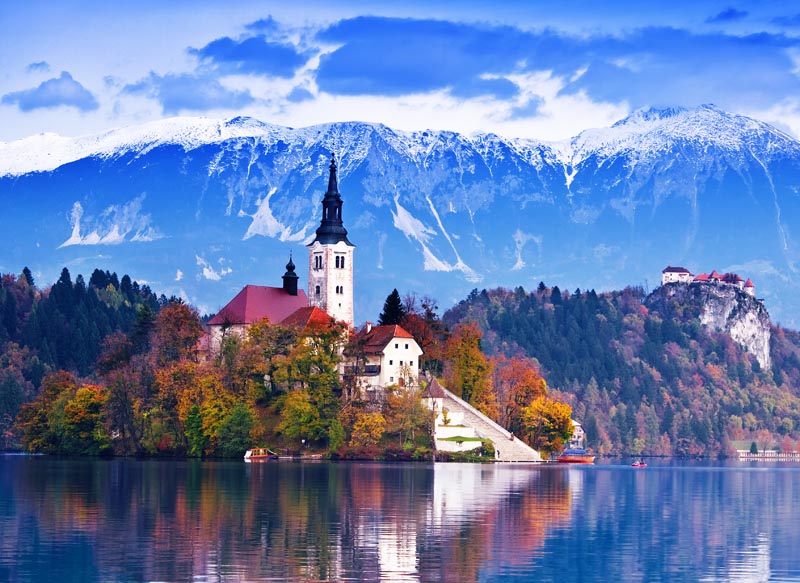 Women’s Special Croatia Slovenia Montenegro Hungary Tour (Ahmedabad to Ahmedabad) guests will report at Sardar Vallabhbhai Patel International Airport-respective airline terminal, four hours prior to the scheduled flight departure time. After collecting the snacks hamper from Airport Representative and completing check in formalities, guests along with Tour Manager will travel to Budapest - also called the 'Little Paris' of Europe. Joining & Leaving (J&L) Tour guests will directly join at Budapest Airport as per the scheduled group flight arrival time. J&L Tour guests who have already reached Hungary can meet the scheduled group as per the guidelines given by Tour Manager. Upon arrival, Tour Manager will guide all guests for airport formalities and proceed to the city. Today we enjoy Danube river cruise and admire the beauty of the Danube River - the magnificent scenic divider and connector of Buda and Pest.

Today we explore Budapest city, we see Heroes' Square – a UNESCO World Heritage Site and one of the main squares in Budapest, stands in honour and memory of the great leaders in Hungary's history, Fishermen's Bastion - a fairy-tale castle on the Buda side of the city, is a lookout point which offers stunning panorama of Budapest, the historic Matthias Church – a Roman Catholic church, Gellert hill – a 235 m high hill overlooking the Danube River, Parliament house – a magnificent example of Neo-Gothic architecture, is the seat of the National Assembly of Hungary, Royal palace – a UNESCO World Heritage Site, also known as the Buda Castle, is the historical castle and palace complex of the Hungarian kings, the famous chain bridge on the Danube River - first permanent suspension bridge which connected Buda and Pest. Later we have free time for shopping at Vaci Street.

Today we proceed to Bled - an alpine lake with the only island in Slovenia, also called as 'Alpine Pearl'. Upon arrival we visit the Bled Castle – a medieval castle built on a precipice above the city of Bled, overlooking Lake Bled. Later we enjoy a traditional wooden boat ride ‘Pletnas’ to visit the tiny island in the middle of Lake Bled. Here we visit the glorious 17th century Baroque Church of the Assumption- also known as The Church of Mary the Queen. Later we proceed to Ljubljana – capital of Slovenia, is one of the smallest European capitals.

Today we enjoy walking tour of Ljubljana, we see Preseren square – the central square in Ljubljana, Triple Bridge – a group of three bridges across the Ljubljanica River, it connects the Ljubljana's historic old town on one bank and the modern city of Ljubljana, Central market – an open air market, Town hall - seat of the Municipality of Ljubljana, Cathedral of St. Nicholas – also known as Ljubljana Cathedral, built as a Gothic church in the early 18th century and later replaced by a Baroque church, Dragon Bridge – a road bridge, built across the Ljubljana River and adorned with dragon statues. In the afternoon we take the funicular ride and visit the 15th century Ljubljana castle – it houses a museum and exhibition on Slovenian history. Followed by a visit to Postojna Caves - The caves were created by the Pivka River. It is an intricate network of tunnels decorated by stalagmites and other natural features which are shaped by tiny droplets over millions of years. Upon arrival we take a train to the magical underground world. Postojna Cave is the only karst cave with a railway, which was built more than 140 years ago. Later we proceed to Zagreb - Croatia’s capital which has 900 years of history.

Today we explore Zagreb city, we walk through the Upper Town (Gornji Grad) - the oldest part of Zagreb which has a splendid labyrinth of narrow cobblestone streets and wonderful buildings. Here we see St. Mark's church with its multi-coloured tile roof bearing the coats of arms of Croatia, Croatian Parliament building- located within St Mark's square and next to the popular St Mark's church, the Baroque church of St. Catherine, and the Cathedral of St. Stephen - also known as Zagreb Cathedral and it is the tallest cathedral in Croatia, Later we take a stroll through Zagreb’s main open-air farmers’ market - Dolac Market, then we walk through the Lower Town (Donji Grad) - Zagreb’s busy city centre. Here we see, Statue of Ban Jelacic - the Ban of Croatia who is remembered for his military campaigns during the Revolutions of 1848, National Theatre- a theatre, opera and ballet house, and the University of Zagreb- one of Croatia’s oldest institutions. In the afternoon we visit Mirogoj Cemetery - One of the most beautiful cemeteries in Europe, it looks more like an art gallery than a cemetery and was designed by famous architect Hermann Bollé in 1876, and Maksimir - largest and oldest public park in Zagreb which is designed in the style of an old English garden. Later we proceed to Plitvice National Park.

Today we visit Plitvice National Park – a UNESCO World Heritage Site, home to 16 lakes connected by a series of waterfalls and surrounded by close-packed woodland. Upon arrival we enjoy the sight of thousands of sparkling water falls, clean pure air, the great Splashier and idyllically boat ride on Lake Kozjak. Later we take a walk on one of 18km marked trails. Later we proceed to Zadar – a city on Croatia’s Dalmatian coast, which is known for the Roman and Venetian ruins, also for the unique modern wonders. Upon arrival we explore Zadar city, we see the Forum square - a municipal square from the Roman era, St Donatus Church - built in the 9th century, this church is the largest Pre-Romanesque building in Croatia, Port Marina- situated in the central part of the Adriatic coast and right in the centre of Zadar and Roman City Walls – These walls allowed the city to retain its independence and meant that it was never captured by the Turks. Later we visit Zadar’s incredible Sea Organ - an architectural sound art object which plays music by way of sea waves and Sun Salutation - It consists of a 22-meter diameter circle, with photovoltaic solar modules underneath.

Today we proceed to Split- one of the Adriatic's most vibrant port cities, stunningly located between mountains and sea. Upon arrival we enjoy walking city tour of Split. We see City Hall- Sometimes referred to as the Communal Palace, Fish Market- one of the central points of the city life is called as Peskarija, Statue of medieval Croatian bishop Gregory of Nin, the Golden Gate- 4th-century Roman stone entryway to Diocletian's Palace, The clock tower, later we visit the Cathedral of Saint Domnius - locally known as the Sveti Dujam is the Catholic cathedral in Split. Further we explore Game of Thrones shooting locations which includes, Diocletian's Palace- where the slaves conspired with the Unsullied Army to overthrow the masters, and Klis Fortress- where Daenerys Targaryen launched an attack on the mountaintop city of Meereen.

Today we proceed to Mostar - a city in southern Bosnia and Herzegovina, straddling the Neretva River. Upon arrival we explore Mostar city, we see Stari Most bridge - a UNESCO World Heritage Site, is a 16th century Ottoman-style bridge that spans the Neretva River and connects the two sides of the city, Koski Mehmed Pasha Mosque – a Small mosque dating to the 17th century. Followed by a walk through the cobbled streets of the Old Town and wander the colourful Old Bazaar which dates back to the 16th Century. Later we proceed to Dubrovnik – a stunningly intact walled city on the Adriatic Seacoast. En route we drive through Ston town, famous for its walls, it is the longest defensive structure in Europe; they are sometimes referred to as the ‘European Walls of China’.

Today we proceed to Kotor - a fortified town on Montenegro’s Adriatic coast. Upon arrival we explore Kotor city, we see Square of Arms - Kotor’s largest city square, Bizanti Palace- a fine example of Renaissance architecture with elements of Baroque style. The building still bears the initials and coat of arms of one of its previous owners – Nikola Bizanti, Beskuca Palace - It was built in the middle of the eighteenth century St Tryphon Cathedral - one of only two Roman Catholic Cathedrals in Montenegro, Ozana Church- represents a fine example of Romanesque architecture. Followed by a visit to Maritime Museum – It has an excellent collection of exhibits from the Bay of Kotor. More than just maritime pieces, the museum has traditional dress, coins, weapons and furniture. Northern Gate - 16th-century Northern Gate was built to commemorate Kotor's victory over Hayreddin Barbarossa, a famous Turkish admiral. Later we enjoy boat ride to visit Our Lady of the Rocks church at Perast, Kotor Bay. Our Lady of the Rocks - A tiny church on a man-made island in the Adriatic. In the evening we proceed to Dubrovnik – a stunningly intact walled city on the Adriatic Seacoast.

Today we walk through Dubrovnik’s Old Town exploring Game of Thrones shooting locations to see the sights of King’s Landing, the capital of the Seven Kingdoms. We see Onofrio’s Fountain- a Circular springwater fountain built in 1438 & decorated with ornate, carved-stone masks, Franciscan Monastery- one of the finest features of Dubrovnik’s architecture, Orlando's Column- it features armoured knight Orlando who according to the legend saved Dubrovnik from a 15 month long Saracen siege. Bell Tower- an important public and communal structures of the Renaissance features. Rector's Palace- that used to serve as the seat of the Rector, Church of St Blaise- One of the most beautiful sacral buildings in Dubrovnik, Fort Revelin and Minceta Tower. Later we visit Fort Lovrijenac - an 11th-century castle perched high above the sea, aka Blackwater Bay- which is featured in battle scenes of Game of Thrones, in the evening Sail on the same Karaka ship used in filming of Game of Thrones and the view of King’s landing from the sea side.

It’s time now to say goodbye! Women’s Special Croatia Slovenia Montenegro Hungary Tour (Ahmedabad to Ahmedabad) guests will proceed to Dubrovnik Airport as per the scheduled group flight departure time. After completing airport formalities, Women’s Special Croatia Slovenia Montenegro Hungary Tour guests will travel back to Ahmedabad with Tour Manager. Joining & Leaving (J&L) guests can be dropped at Dubrovnik Airport along with scheduled group or they can have their own arrangements made for the return journey back home. Women’s Special Croatia Slovenia Montenegro Hungary Tour concludes with mixed feelings! Happy to have made so many good friends, visited beautiful places and collected joyful memories to be cherished for a lifetime. We leave with a heavy heart as the golden days of the Tour come to an end. Let’s stay in touch with each other through email, phone, WhatsApp, Facebook, Instagram and meet again on more such wonderful tours. wishes all guests a very happy, healthy and wonderful life ahead. 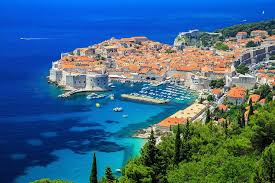