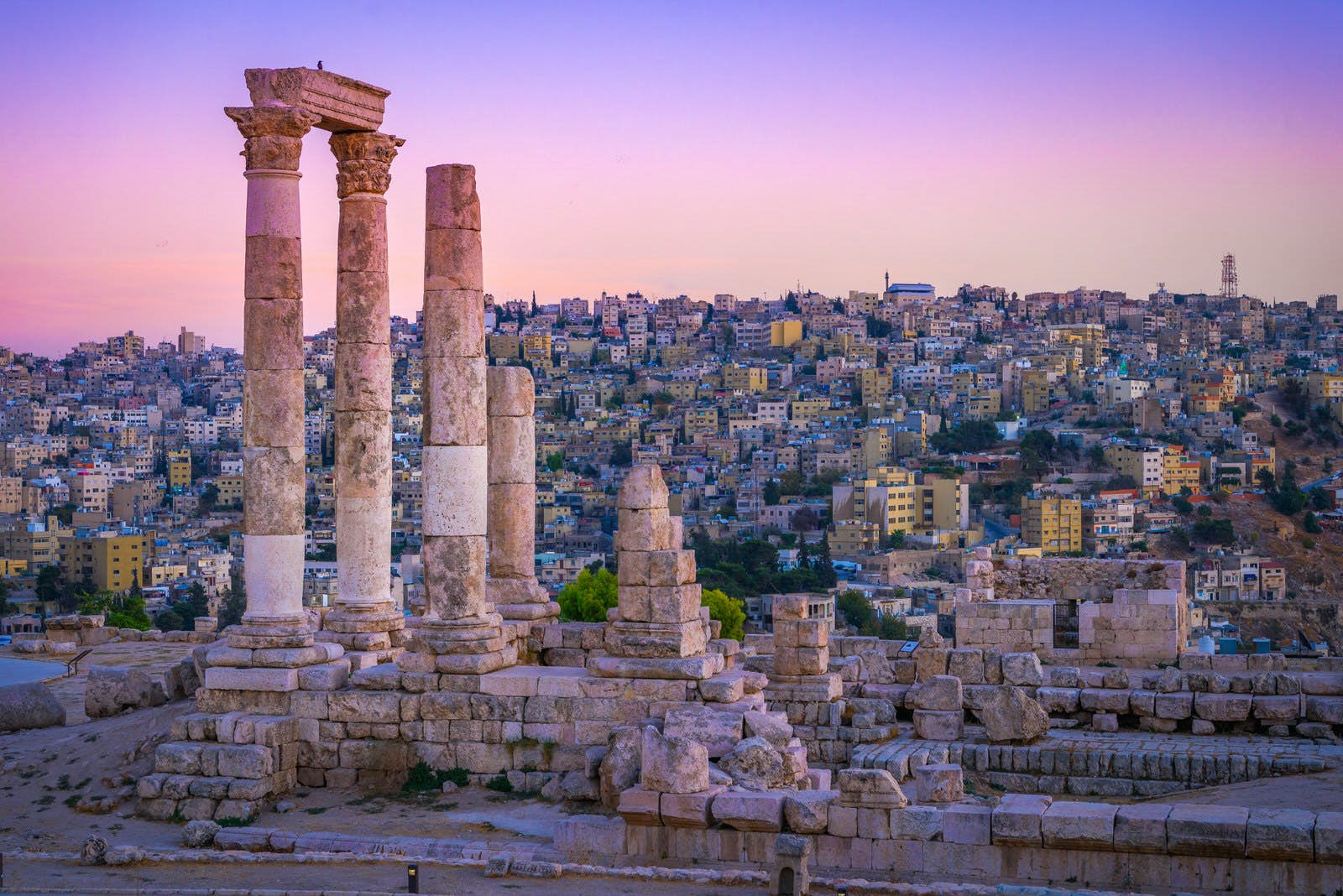 Arrive at Jordan Queen Alia International Airport in capital city Amman, you will be transfer for Dinner at the restaurant. Later proceed to check-in the Hotel. Overnight, stay at the Hotel.

After morning breakfast at hotel, check-out from Amman hotel; visit Madaba, a city best known for the famous 6th century Mosaic map of Jerusalem & Holy Land and for its spectacular Byzantine and Umayyad mosaics and visit of St. George’s church. Later visit Mt. Nebo (site only as the church is closed down for renovation) a city mentioned in the bible as the place where Moses was granted a view of the Promised Land that he would never enter. You will be transfer for Dinner at restaurant. Overnight, stay at the Hotel.

After morning breakfast at hotel, Visit the Nabatean Red Rose city of Petra, one of the 7 world wonders and a UNESCO World Heritage site. Enter the city through 1KM long narrow gorge which is flanked either side by 80m high cliffs! Notice the dazzling colors and formations of the rocks. The site is massive, and contains hundreds of elaborated rock-cut tombs, a treasury, Roman-style theatres, temples, sacrificial altars and colonnaded streets. We head further down in southern Jordan to visit other significant sites including Wadi Rum. This is a stupendous, timeless place, virtually untouched by humanity and its destructive forces. Explore Wadi Rum on a 1.30 hour jeep ride into the Jordanian desert! Wadi Rum was best described by T.E. Lawrence as “Vast, echoing and god-like”, and by the locals as “Valley of the Moon”. You will be transfer for Dinner at restaurant. Overnight, stay at the Hotel.

After breakfast, free day at Aqaba of leisure and relaxation. Jordan’s splendid Red Sea resort has a wealth of other attractions apart from being a delightful beach retreat; it is actually a great base from which to explore various places of interest in southern Jordan. Aqaba is a fun place and a microcosm of all the good things Jordan has to offer, including a fascinating history with some outstanding sites and excellent activities, superb visitor facilities, good shopping, and welcoming, friendly people, who enjoy nothing more than making sure their visitors, have a good time. You will be transfer for Dinner at restaurant. Overnight, stay at the Hotel.

After morning breakfast at hotel, check-out proceeds to Dead Sea; at 410 meters below sea level, the Dead Sea is the lowest place on earth. Jordan’s Dead Sea coast is one of the most spectacular natural and spiritual landscapes in the world and it remains as enticing to international visitors today as it was to kings, emperors, traders, and prophets in antiquity. The main attraction of the Dead Sea is of course the soothing, abnormally salty water itself. The salt content of the water is 31.5% making the water so buoyant that it is impossible for the visitor to sink. The water also contains 21 minerals including high levels of magnesium, sodium, potassium, and bromine and 12 of these minerals are found in no other body of water in the world. Continue to Amman. You will be transfer for Dinner at restaurant. Overnight, stay at the Hotel.

After morning breakfast at hotel check-out from hotel, proceed to the Queen Alia International Airport as per your flight schedule to board flight for your hometown. 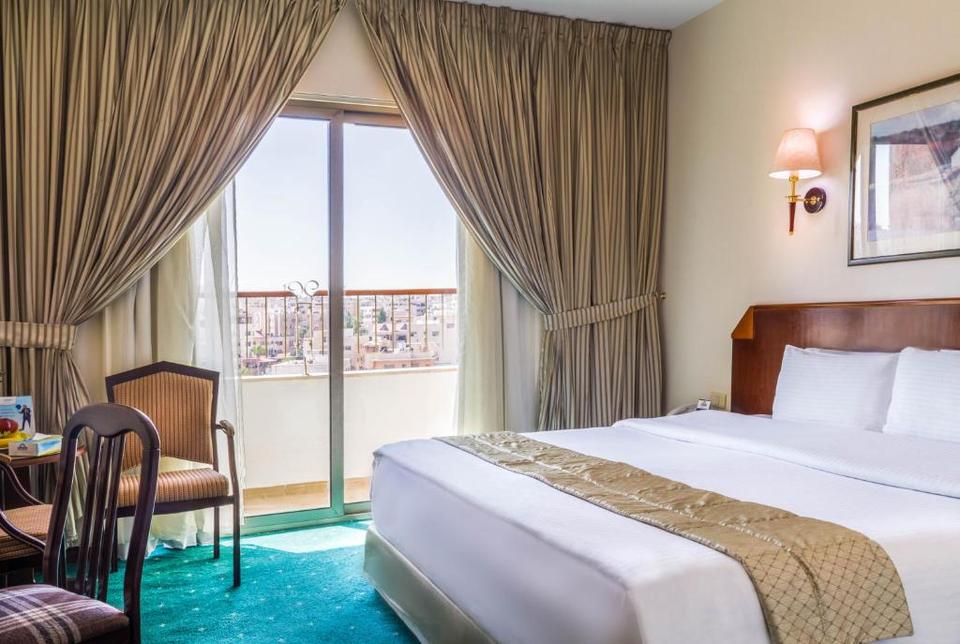 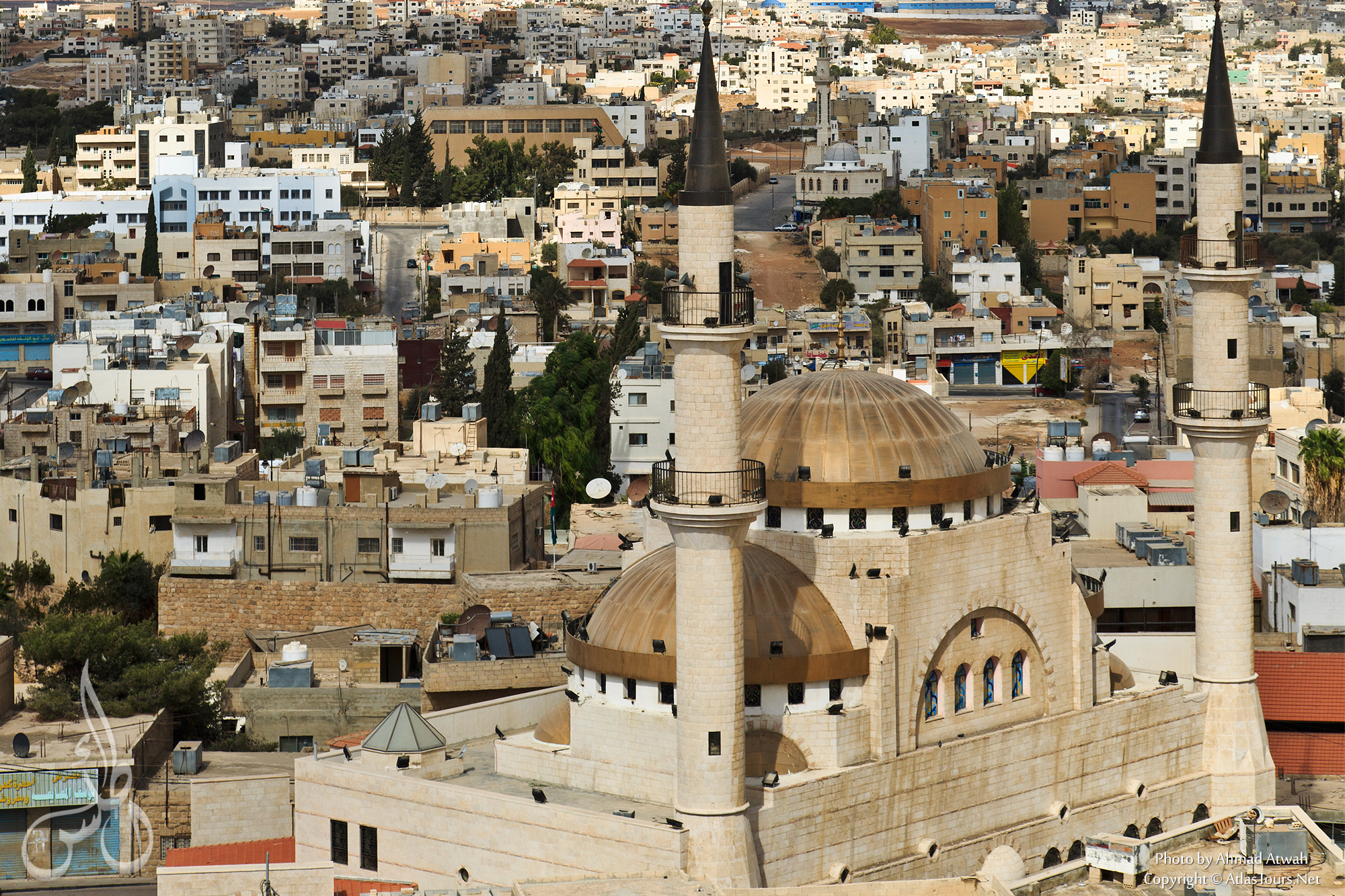 Just 30km from Amman, along with the 5,000-year-old Kings´ Highway, is one of the most memorable places in the Holy Land. After passing through a string of ancient sites, the first city you reach is Madaba, known as the “City of Mosaics." Best known for its spectacular Byzantine and Umayyad mosaics, Madaba is home to the famous 6th century Mosaic Map of Jerusalem and the Holy Land. With two million pieces of vividly colored local stone, it depicts hills and valleys, villages and towns as far as the Nile Delta. The Madaba Mosaic Map covers the floor of the Greek Orthodox Church of St. George, which is located northwest of the city center. The church was built in 1896 AD, over the remains of a much earlier 6th century Byzantine church. The mosaic panel enclosing the Map was originally around 15.6 X 6m, 94 sq.m., only about a quarter of which is preserved. Other mosaic masterpieces found in the Church of the Virgin and the Apostles and in the Archaeological Museum depict a rampant profusion of flowers and plants, birds and fish, animals and exotic beasts, as well as scenes from mythology and the everyday pursuits of hunting, fishing, and farming. Literally, hundreds of other mosaics from the 5th through the 7th centuries are scattered throughout Madaba's churches and homes. In line with Jordan's commitment to restoring and preserving its mosaic masterpieces, Madaba’s extensive Archaeological Park and Museum complex encompass the remains of several Byzantine churches, including the outstanding mosaics of the Church of the Virgin and the Hippolytus Hall, part of a 6th-century mansion. Close to the Church of the Virgin is the Madaba Institute for Mosaic Art and Restoration, which operates under the patronage of the Ministry of Tourism. The only project of its kind in the Middle East, the Institute trains artisans in the art of making, repairing and restoring mosaics. 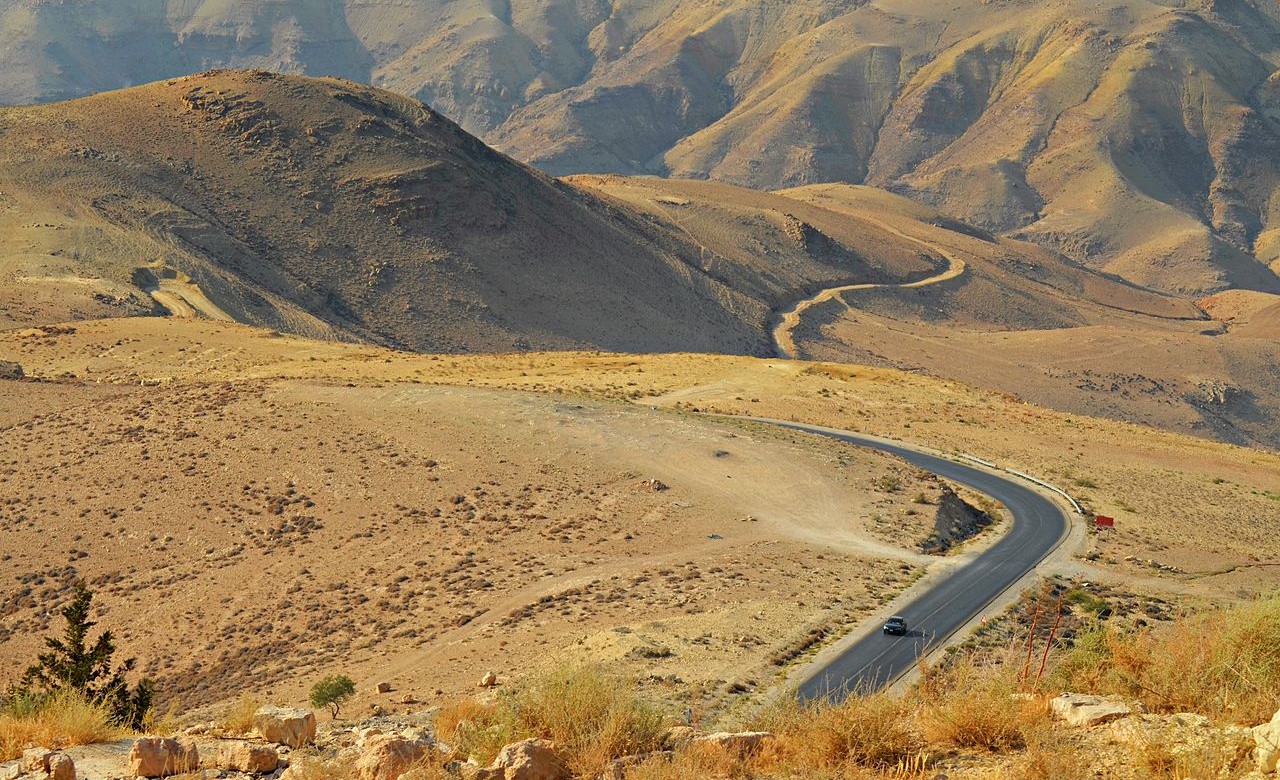 Mount Nebo is an elevated ridge in Jordan, approximately 710 metres above sea level, mentioned in the Hebrew Bible as the place where Moses was granted a view of the Promised Land. The view from the summit provides a panorama of the Holy Land and, to the north, a more limited one of the valley of the River Jordan. 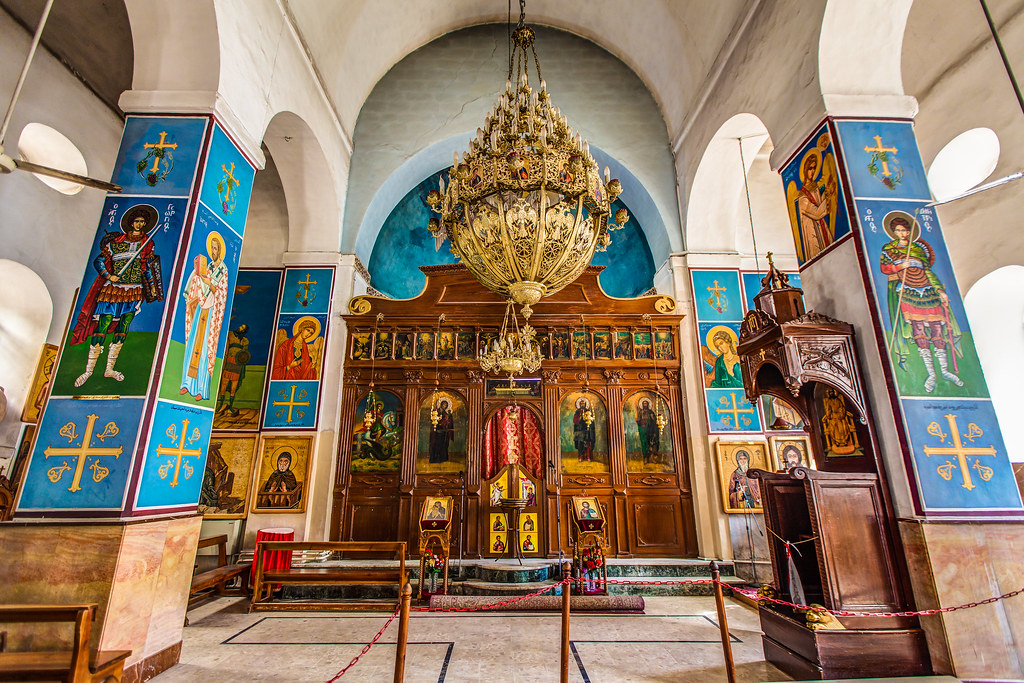 This rather modest 19th-century Greek Orthodox church houses a treasure of early Christianity. Imagine the excitement in 1884 when Christian builders came across the remnants of a Byzantine church on their construction site. Among the rubble, having survived wilful destruction, fire and neglect, the flooring they discovered wasn’t just another mosaic but one with extraordinary significance: to this day, it represents the oldest map of Palestine in existence and provides many historical insights into the region. Crafted in AD 560, the map has 157 captions (in Greek) depicting all the major biblical sites of the Middle East, from Egypt to Palestine. It was originally around 15m to 25m long and 6m wide, and once contained more than two million pieces. Although much of the mosaic has been lost, enough remains to sense the complexity of the whole. On Friday and Sunday mornings the church opens at 7am for Mass (visitors are welcome); viewing the map at these times is not permitted. A small shop by the exit sells copies of the map and reproduction Orthodox icons. The ticket office doubles as a small interpretative centre, and has excellent displays recounting the history of the mosaics and the church – it's well worth spending some time here before viewing the map, as it will make it easier to spot the details that you want to focus on in the church.

Wadi Rum, the valley of moon is timeless. It is 80 km drive from the south of Petra, and its 74000 hectares of primeval landscape were designated a UNESCO Heritage since July 2011. It will be the greatest and exceptional experience during your entire visit. Walk in the desert at dawn and dusk, and watch the colors change as the sunsets. And most importantly sleep out under the clear night sky, drifting off after gazing up at a canopy brilliant with the Milky Way and the shooting stars.