Upon arrival at Chennai, meet our representative. Later, we shall visit the Puzhal Temple, which is an ancient and popular tirtha in Tamilnadu. Here grand images of the first Tirathankara Lord Risabhadeva and Lord Parsvanatha are installed here. The temple is 1500 years old and was built by King Koorumbar of Chola dynasty. In ancient times, this place was known as 'Puzhal Kotalam'. Late evening, we will drive back to Chennai. Overnight stay at the dharamshala in Chennai.

Today morning, we shall visit the Jain temple in Chennai, which is located in T. Nagar. It is a gleaming white, two-tiered Jain Shantinath Jain Mandir and the main deity here is Lord Parsvanatha who is the 23rd Tirthankara in Jainism. Later, we will drive to visit the Adeeswar temple, situated in Polal village . It is believed that the temple was constructed in the first century B.C. The main deity in the is of Rishabhadev, and the first Tirthankar of Jainism. Overnight stay at the dharamshala.

Today morning, we will visit Sri Jain Swetamber Dadabadi that has been built in memory of Gurudev. Founded around the year 1838 (Vikram Samvat 1895) Sri Jain Swetambar Dadabadi Temple and Gardens are situated on the Konnur High Road in Ayanavaram. The temple is about 137 years old. Overnight stay at the dharamshala.

Today morning, we shall drive to Kanchipuram. Later, we shall visit Jain Temples at Tirupparuthikkundram. The temples of the Jaina Tirthankaras were built in the 9th Century A.D here and they contain several fresco paintings and a grand image of Bhagwan Mahaveer. Overnight stay at the dharamshala.

Today Morning, we shall drive back to Chennai. On arrival at Chennai, you will be assisted to airport/railway station for your flight/train for onward destination.

The temple incorporates two Chandella period shrines, along with fragment of other Chandella period temples. The present structure may have been constructed in 1870 CE, when a Gajarath festival was organized by Kanchhedtilal Jain of Nagaur marking a renewal of the site accompanied by installations of new images, as indicated by the inscriptions.The pedestal of the 12 foot Shantinath image in the Shantinatha temple bears an inscription dated Samvat 1085 (1027-28 CE) mentioning the installation by Chandradeva, the son of Thakur Devadhar. The inscription is now hidden under plaster. The original Shantinatha temple has been incorporated the 19th century structure, and is now the main centre of Jain worship in Khajuraho. 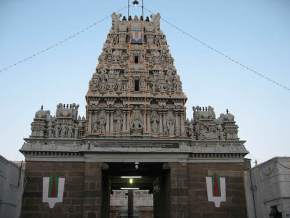 One of the endowments of the city is the famous Jain temple, Adeeswar Temple near Chennai. The spiritual and enchanting surroundings of the temple would help you relieve your body and soul from all the humdrums of daily chores. The temple lies just 9 kilometres away from the city, at Polal village, near the Redhill Lake on the Grand Trunk Road, connecting the city with the neighbouring Southern states. The temple reflects roots of Jainism in Tamil Nadu as well as the growth of its traditions, making it one of the most significant and important shrines among Indian Jains. The temple is devoted to the first Tirthankar Rishabhadev who is also known as Adi Bhagwan, Adeeswar, Adi Nath and Adi Jain. The temple, sometimes referred to as the Polal Temple, is quoted in Tamil literature, inscriptions and legends for its divinity and sanctity.

Trilokyanatha Temple in Thiruparthikundram (also called Thiruparthikundram Jain temple), a suburb in Kanchipuram in the South Indian state of Tamil Nadu, are dedicated to the Jain religious figures. It is associated with Digambara sect of Jainism. Constructed in Dravidian architecture, the temple is believed to have been built during the reign of Pallava dynasty during the 8th century with later contribution from Medieval Cholas, later Pallavas and Vijayanagar kings.The temple is administered by Department of Archaeology of the Government of Tamil Nadu as a protected monument, while it is maintained by hereditary trustees. The temple along with the Chandraprabha temple in the surrounding precinct the region is referred as Jaina Kanchi, along with the other two parts of the town being named Shiva Kanchi and Vishnu Kanchi.