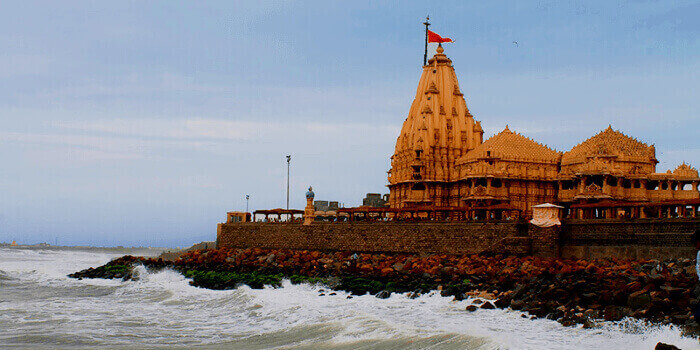 Meeting and greeting on arrival and transfer to hotel. Later sightseeing of Ahmedabad visiting Gandhi Ashram, Hateesingh Jain Temple, Sidi Syed Mosque, Jama Masjid, Adalaj Stepwell. Eve. Visit Akshardham Temple with laser Show Overnight at hotel Ahmedabad was founded by Sultan Ahmad shah in the year 1411 a.d with Blessings of his spiritual adviser shaikh Ahmad khattu ganj baksha of Sarkhej at the site of an old town of ashawal and karnavati. Ahmedabad grew in wealth and splendour for a hundred years and became the centre of skilled craftsmen and merchants. The ancient monuments in and around the City of Ahmedabad may be broadly grouped under two main periods, the first that of ahmad shah - 1 datable to the first half of the 15th-century a.d. , and the second, the period of mahmud begada, datable to the second half of 15th-century a.d.

After Morning Breakfast at hotel later drive to Dwarka en route visiting Gondal on arrival check into hotel, Eve: visit Aarti at Dwarkadish Temple. Overnight at the hotel. Dwarka is one of the four holiest pilgrimage sites and main Centre of the Krishna legend. It’s said that Lord Krishna set his capital in Dwarka with entire yaduvanshi clan after his flight from Mathura. Archaeological excavations show that present-day Dwarka is the 6th city on this site, the earlier five having been submerged in the sea. Dwarkadish Temple (Jagat Mandir) The ancient dwarkadish temple, has often been renovated, and the carvings Outside date from around the 16th century, the walls of about 12th century. A highlight of the temple is the 19th-century shikhara tower. The Multipillared sabha mandapa leads to a 60 pillared sanctum Sanctorum dated by scriptures 2500 years. Incredibly details sculpture decorates the Entire temple

Breakfast at Hotel, Am: again visit Dwarkadish Temple Later full-day excursion to Bet Dwarka & Nageshwar Jyotirlingas. Eve: back to Dwarka (optional visit aarti at Dwarka Temple). Overnight at the hotel. Bet Dwarka Bet Dwarka is located 30km north of Dwarka on an island in the middle of the Arabian Sea, next to the coastal town of Okha. It takes twenty minutes by boat to reach the island. Bet Dwarka is said to be the remains of the 250 sq km (96 square miles) of land borrowed from the ocean to build the original city of Dwarka. Nageshwar Jyotirlingas: Situated in the outskirts of Dwaraka, Nageshwar Temple or Nagnath Temple is one of the prominent Shiva shrines in India and this temple represents the removal of evil activities from earth.

After Morning Breakfast at Hotel later drive to Somnath Dwarka en route visiting Porbandar on arrival check into hotel & Lunch. Eve: visit Aarti at Somnath Temple. Overnight at the hotel. “Pauravelakul” and thereafter named “Sudamapuri”. It is located at latitude north 21.37o and longitude east 69.49o on the western coast of Saurashtra where the river Asmavati meets the ocean. It has completed one thousand years on Rakshabandhan, full moon day of Shravana, in the Vikram era 2046. In fact, it is believed that Porbandar was discovered on Raksshabandhan day. Temples, Mosques and Cemeteries Satyanarayan temple, Bhutnath Mahadev temple, Jadeshwar temple, Ramdhun temple and many more temples welcome to pilgrims in Porbandar. Seven mosques named Nagina Masjid, Jumma Masjid, Mitthi Masjid, Khari Masjid, Sunni Vora Masjid, Takia Masjid are also famous for the visitors. Roman Catholic Church, C.N.I Protestant Church, are also well known here. Somnath is one of the 12 jyotirlingas of Lord Shiva. In the Shiva Purana and Nandi Upapurana, Shiva said, `I am omnipresent but especially in 12 forms and places, the jyotirlingas`. Somnath is one of these 12 holy places. Today, Somnath offers a holy pilgrimage, a beach holiday and a number of places of historic, religious or scenic importance. Somnath Temple: The shore temple of Somnath is believed to have been built in 4 phases-in gold by Lord Soma, in silver by Ravi, in wood by lord Krishna and in stone by Bhimadeva. Tales of its riches brought in a series of invasions, but each time the temple was raided, whether by Muhammad Ghazni who took back the silver doors and treasures or by Aurangzeb in a fanatical vein, it was restored by zealous Hindu worshippers to its original glory.

After Morning Breakfast at Hotel Later Drive to Ahmedabad via visiting Sasan Gir The Gir National Park and Junagadh. Later continue drive to Ahmedabad and drop at onward destination. Gir National Park: Reputed across the world for its population of Asiatic Lion, Gir National Park is a paradise for the connoisseurs of wildlife. Spread across an area of 1,412.13 sq Km, it has a rugged terrain and the steep rocky hillsides are covered in mixed deciduous forests. There are teaks, ber, and flame of the forest and banyan trees. Most of the tourists explore the sanctuary in search of Asiatic Lions. The lions, a smaller more compact version of their African cousins are best viewed at dawn or dusk when they are on the move. Gir has also leopards and numerous chital, nilgai, chinkara, the four-horned antelope and wild boar. Marsh crocodiles are often seen at kamleshwar dam & farm developed in the forest. Mount Girnar Mount Girnar is most sacred to the Jain community. This hill is situated in Junagadh and rises to a height of more than 600 m, a climb marked by 10,000 stone-steps. On this hill, various Hindu and a group of 16 Jain temples are located. This sacred hill is visited by millions of Hindus and Jains. The Amba Mata temple is situated on the top of the hill. The newlyweds came here and worship the Amba Mata in order to ensure a happy marriage. One of the largest and the oldest Jain temple, dedicated to Neminath, the 22nd Jain Tirthankar and Mallinath, the 19th Jain Tirthankar are situated just below the Amba Mata temple. Besides this the Bhavnath temple is also located on this hill. The Bhavnath temple is dedicated to Lord Shiva. The Mahashivaratri fair held here is attended by Nagasadhus and pilgrims from all over India. When a traveler to Gujarat, Joss Graham, climbed up the hill for the festival of Shivaratri, he slept there overnight. He woke up on hearing the praying murmurs of the great mass of devotees, about 100,000 of them in their communities and tribal groups. There is also the temple of Samprati Raja, a fine example of the later period and the Melak Vasahi temple.